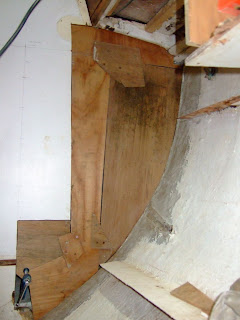 Here's an update on the bulkhead repair. I've managed to cut a piece of tabbing and to make a template for the new bulkhead out of it. The result can be seen in the picture.. It looks like patchwork, probably because it is. I should add here that when I was cutting the bulkhead, the side near the hull was completely rotted and would not come out in one piece. This meant that I had no template to use for shaping the new bulkhead piece. What I did was take draw a vertical line on the remaining bulkhead from top to bottom and measure the distance at right angles from the line to the hull at regular intervals of about 10cm. I transferred those measurements on a large piece of thin cardboard and carved the hull shape.

I've also done my first epoxy job. I used some to sheath the bulkhead at its base where I cut it as it was quite damp there too. But I couldn't be bothered removing all the damp wood so I thought I might as well protect it with epoxy.. I mixed fiberglass in the epoxy after I chopped it up to little pieces. The mix became quite hard quickly, probably because I didn't use the correct proportions of epoxy/hardener/filler. I also found more rot on the cockpit.. A section of wood was filled with what looked like sand which came off quite easily when I touched it.. I got it all out and filled with epoxy/fiberglass-filler mix. There is still some rot there but I just wanted to seal the area so no more water gets inside.. I realise that I have to be a bit more careful with epoxy but at this point I just wanted to familiarise myself with the stuff and get an idea of how to use it and what it can do. I'm pretty impressed with it..

I also managed to charge one of the batteries with my new charger and most importantly to get the engine started. The other battery is probably dead and I'm contemplating buying one of the Red Flash series which are supposed to by quite reliable or perhaps settle for a simple car battery that is half the price.

agyra.com
get feed
Posted by Andreas at 23:56