First sail out of the Crouch (just)

About one month ago, I managed to repair the engine temperature issue without spending a penny! Instead it required a dear amount of elbow grease removing and de-scaling all the cooling water pipes. Works like a charm now. On that day, I sailed to the east just past the River Roach entrance and then back west, past Essex Marina. I only used the genoa as I was single-handed and it was quite windy so I wanted easy sail control. I still haven't tested the furling mechanism on the mainsail.

The past weekend we took advantage of the fine British weather (sunny, freezing & no wind) and motor-sailed from my mooring at Burnham-on-Crouch to the Crouch buoy, marking the entrance to River Crouch. A mere 5nm distance that took about 2 and half hours going against the tide. Of course, it was much faster on the way back taking about an hour or even less. The really annoying bit was having to motor all the way there and back, so still no proper sailing since I launched the boat.

Nevertheless, going all the way to the Crouch buoy was a big step for me. It was the first time that Ting-a-Ling and I got a glimpse of the open sea, beyond the river. Straight ahead, in the distance we could see the wind-turbines of, what I believe to be the Gunfleet Sands offshore wind-farm. Visibility was very good on the day and I believe I could also see the London Array offshore wind-farm through my scope, to the south-east.

Next on the agenda is to sail out of the Crouch, perhaps to the Whitaker Channel. To manage this in the few hours of daylight I'll have to start early, catch an ebb tide out and the flood back in. Problem is all those shallows just outside the Crouch.

It will require some preparation and a good look-out. Tidal streams around the area seem to flow in the North-South direction rather than East-West which is the direction I'll be heading. In any case, I'll have to revise my day-skipper notes and think about planning. Just bought the Eastern Reeds Almanac which could help.
Posted by Andreas at 17:21 No comments:

So yes, boat on the water once again. I think it's been 27 months now. Such a long time. And looking at the boat I tend to think that I could've done o lot more in that amount of time. If only I lived closer or visited more often. In any case, this should be a moment of happiness. And it is to some extent although I haven't sailed her yet. I just went on a short motor-sailing up the river. And on the way back it was up-tide and it took me hours to cover a distance of less than 2NM. And the water temp alarm kept on buzzing which had me de-throttling the engine and putting on neutral. Until I realised we were not going anywhere and I just ignored the alarm and revved up. And we made good progress. But I heard a popping sound coming from the engine, which makes me think: head gasket blown? I have no idea what that is like, I was expecting the engine to seize under extreme heat and poor water circulation. But enough with the random ramblings.

It was nice to be back on the water. I slept on the boat overnight. Luckily my sleeping bag was up to the job at 6 deg. Celsius inside temperature. My greatest joy came when I was putting up my mainsail. It was always a concern that my mainsail had no reefing points and I could face some trouble in strong winds. But then I noticed a little hole on the boom that said oil. And I thought "what for"; and a smile was drawn on my face! I had a furling mainsail! At this point you're probably thinking "Jesus, what an amateur this guy must be not having noticed that in 3 years of owning the boat!". And to some extent you would be right, but I assure you this looks like a pretty standard boom and the furling mechanism is a really basic one: the mainsail rolls around the boom, not inside as most modern mainsail furling systems. So not apparent at all (although, an amateur, I will not deny that I am). And the next question was: "what happens with the kicking strap (boom vang)" if the main rolls around the boom? To this I have not yet found an answer and I do invite your views. My hunch is that there's no kicking strap when the main is reefed (i.e. rolled round the boom). A contraption to this end could possibly be devised - for now I am thinking of attaching the kicker to the boom end (aft) but that doesn't sound too safe. I guess I could manage without a kicker however if need be.

And that concludes my first post back at sea (well, a river in fact but a tidal one so full of seawater).
Posted by Andreas at 19:56 No comments:

Back on the water?

The moment has arrived. I decided that I've had enough of "just work, no play" and I'm putting Ting-a-Ling back on the water.

Last weekend was my last chance to take care of any last minute tasks before launching. By the way, this does not mean that work on the boat has finished - far from it. I just need to get back on the water otherwise I might do something stupid like ..buy another boat! For the past few weeks I've been frantically looking at boats on the internet, just as I was doing before buying Ting-a-Ling. In order to avoid any rash decisions I made the rash decision to launch just when everyone else is lifting their boat out, at the end of September. But the thought of some fine autumn and winter sailing on the river and maybe beyond, is just too good to resist.

So I hopped on my bike and rode the 50 long miles to the boatyard on the weekend to seal some deck leaks (round the samson post and baby-stay chainplate), charge the batteries, shut the sea-cocks, install a wind-vane and antenna on the mast-head and do some surgery on the toe-rail and the deck where a wiggly stanchion post sits. Not major jobs you would think but having the mast sitting horizontally on the deck, a few metres above the ground doesn't really help. In any case I managed to do everything I had planned for so the boat could finally return to the its element after two years on the hard.

At the time I'm writing this, Ting-a-Ling must be floating (hopefully) on the river Crouch in Essex but unfortunately I couldn't be there for the launch and haven't called the boatyard to check but I hope everything went smoothly. I can't wait to get there but some prior arrangements for this weekend means that I'll have to wait for another week before I get to see her.

I still have to fit all the running rigging and god knows if I remember how to do that but that's hardly a problem - I'm sure some of the good fellas around - if anyone is still out there by early October - will show me the ropes if need be.

Of course, the work will continue but perhaps on a more leisurely pace. 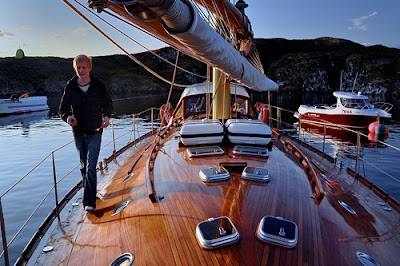 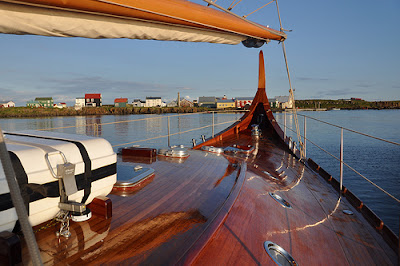 I spent two weekends on the boat doing work in the past month. My new strategy revolves around this objective right now: "Get the boat on the bloody water and do some sailing". So no more attention to detail here - I realised that at the pace I'm working on the boat it will take me ages (years literally) to get it into the shape I would like it to be. It's just not gonna happen and I should just settle for less, i.e. a boat that doesn't look great but is seaworthy enough for light sailing.

The only thing missing right now is an echo sounder. There are two on the boat but none seems to be working. Once that is doen, the boat is good to go. Of course, it is almost September now and I've missed one more sailing season. But I intend to sail well into the winter to catch up.

It's been about 8 months since I last did any work on the boat. I don't even know what to expect when I visit next time. Meanwhile I've been paying my monthly storage fees which seems like a waste of money if I'm not working on the boat or using it. My lame excuse is that I went away for a couple of months, to a place where it's warm and sunny and it doesn't rain - and when I came back I just couldn't amass the willpower to drive 70 miles on my motorbike in the cold and wet weather conditions. But today its sunny and warm (well warmer than usual) in London and I'm inspired - so I thought I'd better write something about the boat and that might spark my motivation. so there you go. I'll be back soon.
Posted by Andreas at 15:12 No comments: